skip to main | skip to sidebar

A note on the Cameron Crazies 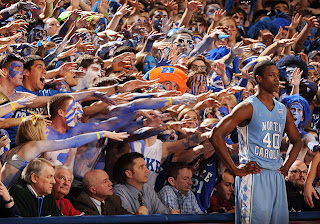 Here's a shot of the Cameron Crazies taunting Harrison Barnes courtesy of Bob Rosato of Sports Illustrated.  I believe this photo shows much of what is wrong about the Crazies.

First and foremost, notice that many of them are checking themselves out on the videoboard.  This is my #1 pet peeve about the Crazies.  Collectively, they are not about supporting the team, as Dick Vitale and other media personalities would have you believe.  I'm sure many of them feel they are doing this, but the vast majority think they - the Crazies themselves, that is - are the main attraction.  This is their reasoning behind the cheer sheets, taunting, bobbing up and down, etc.  It's not about being a fan - it's about putting on a show.

Also, what is it about pointing in the face of and yelling at an opponent makes them great fans?

I am all for being loud and supporting your team, and for that I can commend the Crazies.  They do make an impact on the game.  However, where they used to be witty and original, they've now become a tired cliche.  It's the same old taunts - the speedo guy trying to distract free throws, counting the footsteps of players that foul out, pointing in the faces of players on the sideline.  I haven't seen anything from them in years that jumped out to me as even halfway creative.

Carolina fans are often known as a "wine and cheese" crowd, and I often wish for more from them.  But, thank goodness they aren't the Crazies....
Posted by jdheel at 1:26 PM No comments:

Alright.  As you can see from last night's (really this morning's) post, this blog is off and running.  What better night to start it than the night of a UNC-dook game?

I'm not really sure where I plan to go with this blog.  As much hate as I have for dook - and that hate is immense - I'm not sure I can fill up a blog solely on that.  I have much more love for my Heels than hate for dook, and I hope to celebrate that too, if not moreso.  "BEAT DOOK" is more of a slogan to live by than it is a testament to the amount of dook-bashing I plan to do here.  But, don't worry - there'll be plenty of that too.

As I reflect on last night's game in a clearer state of mind, I wish I could say that my rantings were solely out of frustration.  I am normally not the type to whine about refereeing, because I truly believe that in most UNC-dook games, the refs do an outstanding job of letting the game go and letting it be decided on the court.  I can say this as a Carolina fan that my team definitely gets calls at times because of the name on the chest, and obviously I feel that dook does as well.  The cool thing is that usually when these two teams face off, the refs let them decide the game on the court.

Unfortunately, I do feel like the refs had an outcome on the game last night.  I won't back down from that just because it's not PC to mention the refs' impact on a game.  The PC thing is to say that it's not an excuse and the players have to fight through some bad calls.  I do believe that a team has to fight through the bad calls, but I don't believe in sweeping those calls under the rug.  The refs make mistakes just like the players do, and they shouldn't be above criticism.  Sometimes their mistakes even out or don't add up to much at all, and sometimes they have a big impact in the way a game is played.  I felt like last night the way the game was called rewarded one team for playing lazy basketball and punished another team for playing patient basketball.

I mentioned some patented dookie tactics to gain a cheap advantage.  Here's a list of things I noticed last night - some of which are legal, and most of which aren't:

There are others, but that's a greatest hits compilation of cheap dookie tactics.  They were on full display last night.
Posted by jdheel at 10:52 AM No comments:

It's a tough night to be a Carolina fan.  As usual, this Carolina-dook game was hard-fought by both teams and basically came down to the final minute.  A cursory glance at the final score would show the higher ranked team winning on its home court, as expected.  Nothing out of order in that, right?  It would seem that the best team won.

Surprisingly, though, I'm not sure the best team won.  What I saw tonight left the impression of Carolina as the more athletic and more skilled team.  When both teams played straight up basketball, dook looked panicky and desperate, and Carolina looked confident and poised.  dook was the team hoisting up rushed three-pointers and Carolina was the team patiently working the ball around for better looks at the basket.  Obviously, I'm biased, but one of those styles of play is so much more beautiful than the other.  It's a shame that jacking up three-pointer after three-pointer is rewarded in college basketball these days.

Anyway, as I see it, the difference between the two teams in the final score relied on two somewhat related factors.  The first is experience.  Carolina played with poise in the first half, but they got rattled in the second half and couldn't get their mojo back.  dook took advantage of this like a team of their experience should.  They shot the ball better and had more confidence down the stretch, and that points to experience.

The other factor was refereeing, and I want to focus on that a bit more (because this is an anti-dook blog, after all).  I know, I know - that's a sore loser mentality, and I usually don't accept referee bias as an excuse for losses.  However, I truly believe poor refereeing had a tangible impact on this game.

I call it "poor refereeing" and not "bias" because I don't believe refs - at least most of them - truly miss calls on purpose to help a team win.  For example, I don't believe tonight the refs made any calls in dook's favor to help them to victory.  What they did do was swallow their whistles throughout the majority of the first half when dook couldn't buy a bucket.  I feel like that was an attempt to keep the game from getting out of hand, because the refs wanted to be a part of a close Carolina-dook classic game.  I don't think was intentional, but deep down when dook was teetering on the edge of collapse, there were some calls that normally would have been made that were not, simply because if they were then the game would practically be out of reach.

In the second half, calls were even more skewed not only because dook was the aggressor, but also because they starting playing a cheaper style of basketball that half.  Unfortunately, the refs allowed them to do this.

One of the most egregious examples of the shift in strategy were constant moving screens on three-point shots - one in particular where a dook screener shoved the defender into the lane while the defender was trying to fight through the screen.  Of course that resulted in a made three.  That is a common dookie tactic, by the way.  Another common tactic is the flop.  dook has been known for this for years, but tonight it came out in full force.  Other dookie tactics included the constant pushes in the back and over-the-backs on rebounds, particularly by the Plumlee brothers.  They got whipped in the first half on the boards, and it was obvious that they were determined to push and shove their way to rebounds in the second half.  They never once were called for an over-the-back or any kind of foul on a rebound, which is somewhat shocking to me.  Meanwhile, Carolina got called for numerous rebounding fouls.  Anyone who watched the game should be scratching their head over that discrepancy.

It's no coincidence that these tactics showed up more and more in the second half.  What that tells me is that in the first half, dook couldn't play straight up with Carolina.  The Heels were too athletic for the Devils, and they couldn't compete.  Obviously, at halftime Coach K told his players to pull out every cheap tactic in the book to gain an advantage.  Thus, the moving screens, flops, over-the-backs, persistent hand-checking, etc.  Coach K vowed that his guys would scratch and claw (literally) their way to a victory, and the refs stood by and let it happen.  It's a real shame, because that kind of refereeing kills the game.  It just rewards the lazy and impatient.

I do want to give props to Nolan Smith and Seth Curry.  They were literally the entire team for dook.  They were the only players who in my opinion showed up and played straight up tonight.  Those two definitely deserved the win.  It's really a shame to me that the rest of the team played cheap basketball, because those two came to play and really put on a show.

From a Carolina perspective, I couldn't be prouder of my team.  They fought through it all with class.  They played an honest game, and took every shot from dook (and the refs) in stride.  I'm not sure how they kept their cool out there - because I sure couldn't have.

So, that's it - a 79-73 final in favor of the dookies.  The score is disappointing, but the effort was not.  I'm looking forward to the rematch already.
Posted by jdheel at 2:54 AM No comments: